Like a well-drilled military operation or summat, the mildly unhinged gentlefolk of CRAPPPS hit the road Friday and Saturday 14–15 January on their 44th consecutive annual Plough Play tour.

Made with lashings of ale and mummery goodness, the play is based on a script first performed in Cropwell Bishop in 1890.

It’s a limited tour this year, with eight shows being performed over the two nights as per the gig list here. All proceeds will go, as ever, to Nottingham NSPCC.

This year’s team (in order of appearance) is: 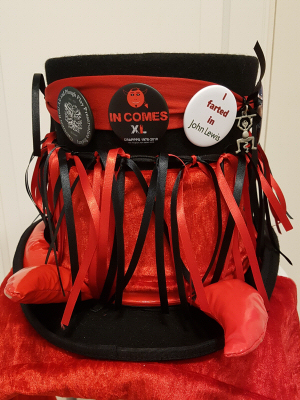 Guess what? You can click on the names linked above for some truly lovely (?) pen pictures of our handsome and attractive cast.

All biographies have been supplied by the dubious individuals in question (apart from Eddie’s, which we were forced to make up because he didn’t return our emails).

It’s been something of a labour of love keeping the CRAPPPS team active through the COVID lockdowns of 2020 and 2021. With pubs having to close their doors to live performances we had to smuggle out a couple of online shows instead, making more than £500 for charity in the process.

But now … we’re itching to get back out on tour. See you in a bit, mi duks!